From Comfortable Complacency to the Courage of Conflict

Most of us avoid conflict – maybe we have been conditioned to or maybe wired to, neuroscience has answers for both sides. Lately, however it seems more and more choosing to be uncomfortable is the best choice to make, for the sake of humanity and the planet.

I was recently on a flight from Wellington to Auckland when a couple, in row one, the exit row, refused to listen and watch the safety demonstration. On the bigger aeroplanes, the demonstration is usually shown on the overhead screens, however there is no screen in row one, next to the door and one of the cabin crew is required to do a manual demo for the 3 passengers in that row.  Often it feels a bit awkward and usually the people in that row usually have a bit of fun with the attendant.

Personally, I have heard and seen the demonstration more that 2000 times (those who know about my flight log book I’m up to 2104 flights at the time of writing this J.) I don’t always pay full attention to the safety talk, however I respect that it is an important part of ensuring passengers are safe in the air and always pay attention in the exit row and when a crew member is addressing me personally.

To sit in an exit row, before you even enter the plane you will be asked at least twice, if you are willing and able to help in an emergency. Once on the plane you are asked again. Part of the verbal safety notice that is read out on every flight says, “Civil Aviation requires all passengers to comply with all safety notices and instructions from the crew.”

On this day, two people sitting in the front row did not pay attention to the demonstration, did not acknowledge the crew member doing the demonstration just for them, and were asked three times by the flight inservice manager to put down their book and phone and pay attention as they were in an emergency row. Three times they looked up for 2 seconds and continued ignoring the crew member. Eventually they were escorted off the plane by police.

Now this article in not about these two people – it is about the Inservice Flight Manager. She chose to do the right thing, for the sake of both the passengers safety and her crew. It would have been easy to be complacent and ignore the rude behaviour and it took courage to uphold the rules and values of Air New Zealand.

Right now, in the world, we are being bombarded with opportunities to choose complacency and remain blissfully comfortable or choose courage and conflict – to be uncomfortable and do the right thing, for the greater good.

This is evident with issues such as parenting, developing workplace culture, health & wellbeing, climate change… the list goes on…

It is so much easier to sit back and wait for everyone else to do something. In fact it is mostly comfortable and convenient to do so. Years ago, colleague and friend, Tony Ryan, re-explained the word “everyone” and suggested that it means ‘every’ – ‘one’ – personal responsibility and ownership – not waiting for others, but taking action and if every ‘one’ person did this, mass change would occur.

In her impassioned, vulnerable and powerful TED talk, Monica Lewinsky talks about choosing to be a bystander or an upstander. She advocates avoiding bystander apathy and upholding the values of what you know to be right, even in the face of ridicule and awkwardness – being an upstander.

It is so easy to get complacent with rules. Malcolm Gladwell writes about this as the Broken Window Syndrome. When no-one says anything, it is assumed no-one cares and the behaviour increases. If no-one says anything about the incorrect uniform a student is wearing, it is assumed that it must be acceptable. When a student doesn’t bring their notice for the trip back by the deadline and still goes on the trip, the bigger message is deadlines mean very little. If no-one deals with the continual lateness of a colleague to meetings, it starts to become acceptable for others to be late. If no-one points out the use of convenient coffee capsules in the coffee machine are causing a problem to the environment, the usage continues and our land fills increase with non-degradable waste.

Again, look at the word “no-one.” Be the ‘one’ who chooses the courage of conflict in the best interests of others. 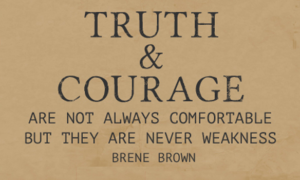 Choosing the courage of conflict, does not mean being a bully, hurting other people’s feelings or intimidating people with your agenda. Choosing to be an upstander involves empathy and compassion.

It is about setting boundaries for our lives and others and as the late Celia Lashlie promoted, holding those boundaries tight.

How might you do this in your classroom, home and life? What are the values which you hold true and strong and are willing to feel uncomfortable to uphold?

Finally, I would like to applaud the Air New Zealand Inservice Flight Manager. Her courage to do the right thing, uphold the company’s values and risk conflict, possible humiliation and the wrath of the full passenger manifest to be an Upstander was admirable.

As my High School motto said, Ake Ake Kia Kaha. Forever and ever be strong.

Published on Friday, May 24th, 2019, under Inspiration, Life lessons, Rules

13 Responses to “From Comfortable Complacency to the Courage of Conflict”